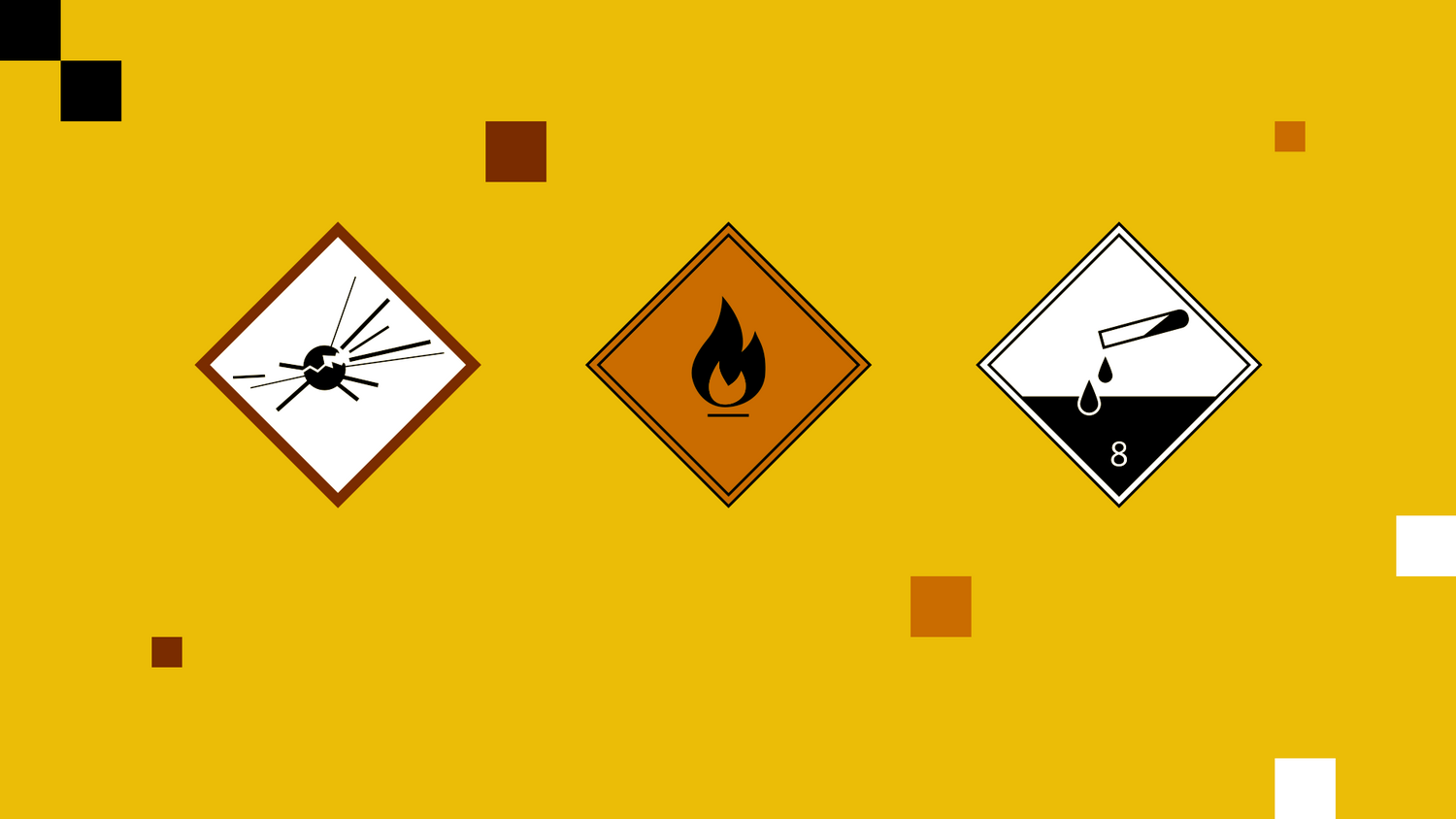 Two out of four crew members lost their lives when the tanker “MS Waldhof”, loaded with 2,378 tons of sulfuric acid, capsized on the Rhine in 2011. A number of unfortunate factors contributed to the ship's accident - the Rhine was in flood and flowing faster than usual, and the Waldhof bypassed a current bend with an unfavorable outer radius and was thus exposed to additional currents. The main cause of the accident, however, was the incorrect loading of the tanker - a full 631 tons over the permitted weight.

In order to salvage the MV Waldhof, 900 tons of sulfuric acid had to be drained into the Rhine. Since this was done in a controlled manner, a fish kill was prevented. The situation would have been different if the tanker had been carrying oil, for example. The case shows how important strict regulations on the transport of hazardous goods (often referred to as “dangerous goods”) really are.

The Transport of Dangerous Goods Act defines what exactly is meant by “dangerous goods” in §2:

“Dangerous goods [...] are substances and objects which, due to their nature, properties or condition in connection with their transport, may pose dangers to public safety or order, in particular to the public, to important common property, to the life and health of people, and to animals and property.” (Translated by the editors)

And it is precisely these dangers that must be minimized as good as possible. This is where regulations on the handling of hazardous goods come in. Which substances are considered dangerous goods and how they are to be classified is derived by the sender of the transported goods on the basis of classification characteristics.

A United Nations (UN) committee of experts assigned UN numbers to transport goods that pose a hazard. The UN number (also called substance number) consists of four digits and can be assigned either to a specific substance or to a substance class: 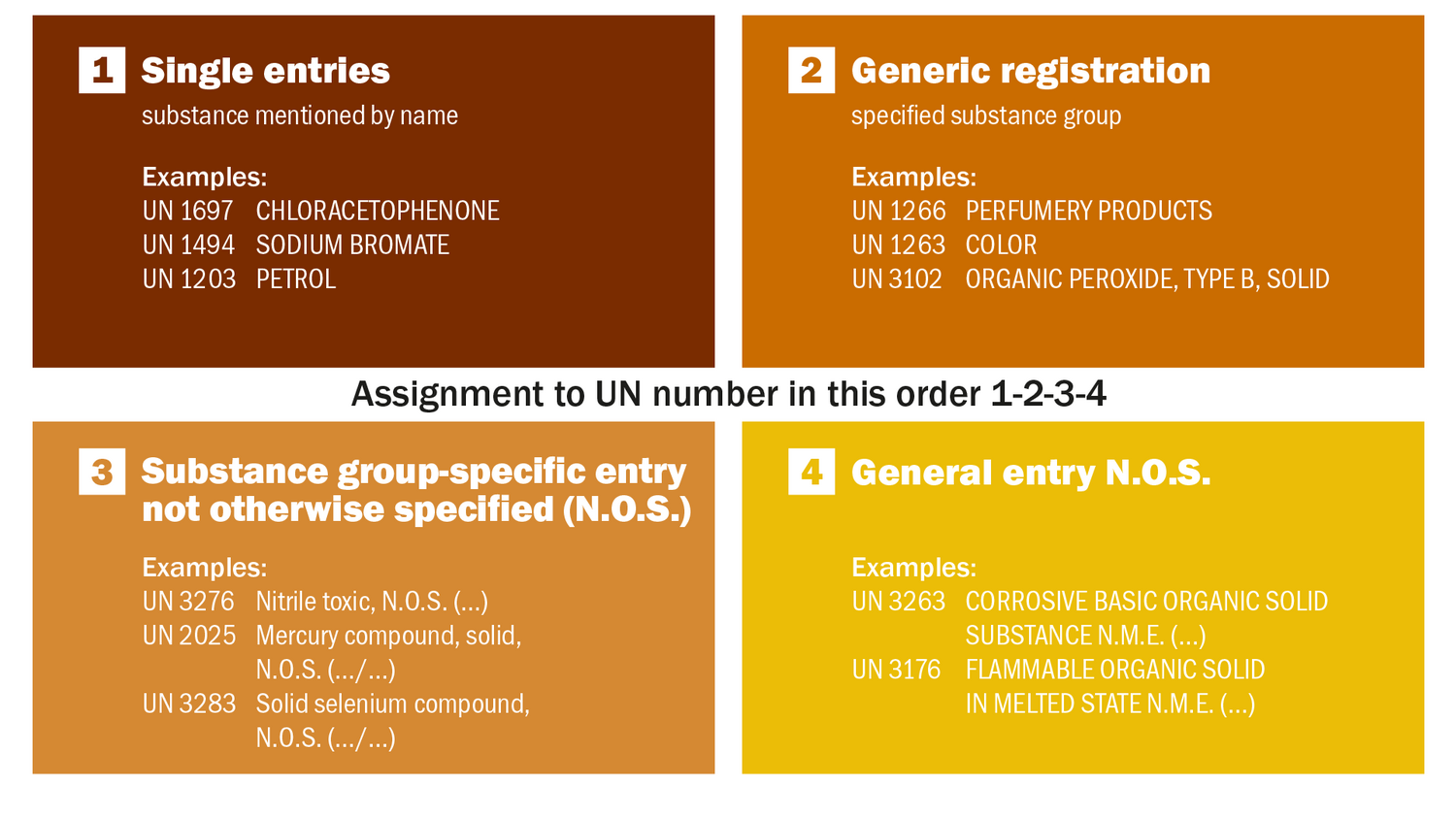 If a dangerous good is also a hazardous substance (i.e., a substance that also poses a danger independently of the transport), there is also a white icon with a a red edge next to the dangerous goods symbol, which indicates the danger posed by the transported good. This labeling is known as GHS labeling (GHS = Globally Harmonized System of Classification and Labeling of Chemicals).

For class 1 hazardous substances, the combination of the dangerous goods symbol and labeling could look like this: 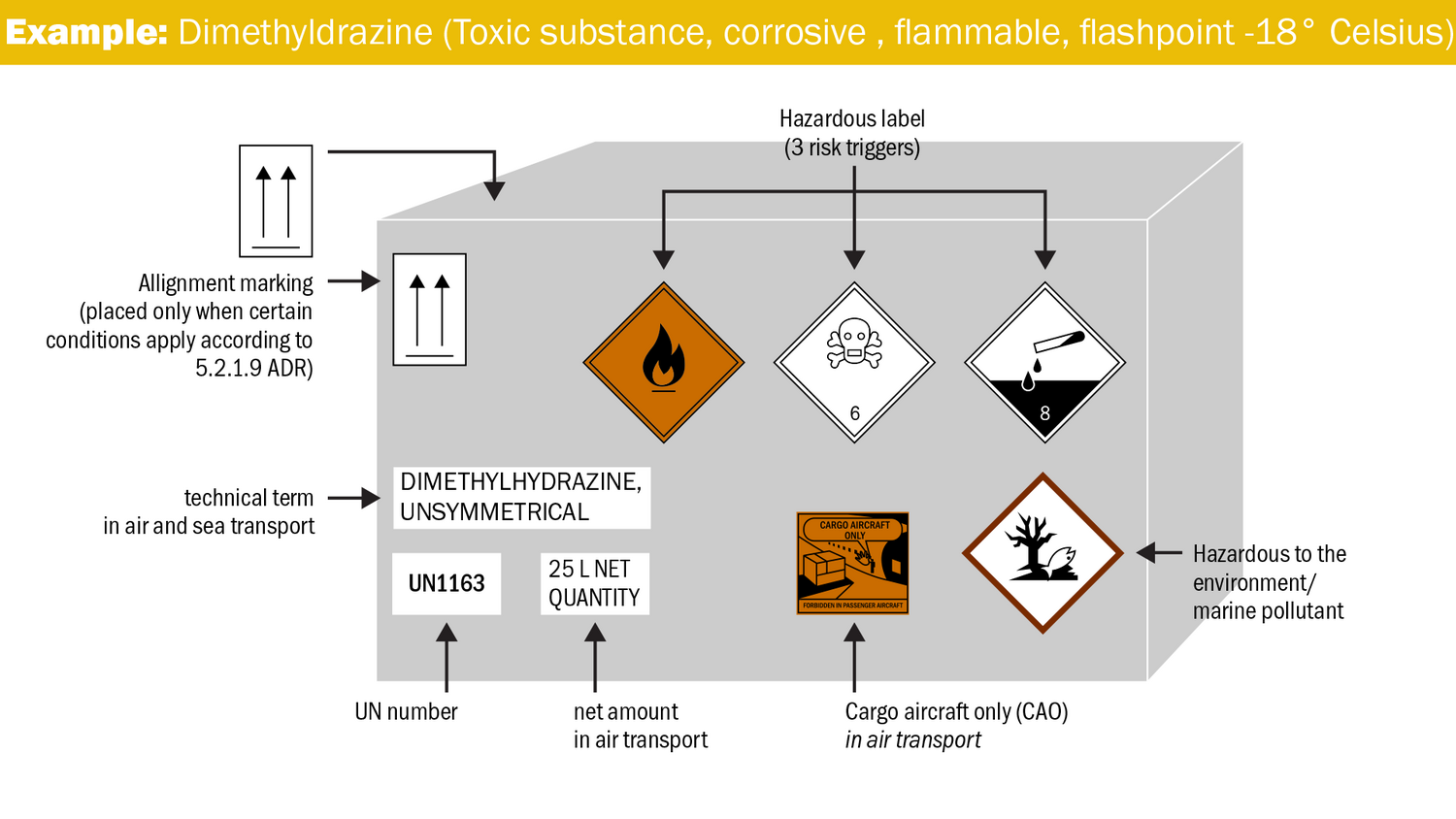 Dangerous goods are transported all over the world - in Germany, by the way, the largest volume is transported by truck on roads. The number of regulations to be observed is correspondingly large. There are extensive national and international laws, guidelines and agreements for hazardous goods.

The requirements regarding classification, packaging, labeling, technical equipment of means of transport when transporting dangerous goods are very precisely defined. Organizational measures, duties and responsibilities of the parties involved in the transport are also specified in the laws. The following regulations apply to the relevant transport routes:

Not every freight forwarder chooses to offer dangerous goods transportation or only transports certain hazardous materials. Overall, the service is worthwhile if large quantities of dangerous goods are transported frequently. For occasional orders, the training costs are too high.

A freight forwarder acts as a carrier of the dangerous goods and must fulfill certain obligations. How exactly a dangerous good must be handled depends on the transport route and the UN number of the substance. 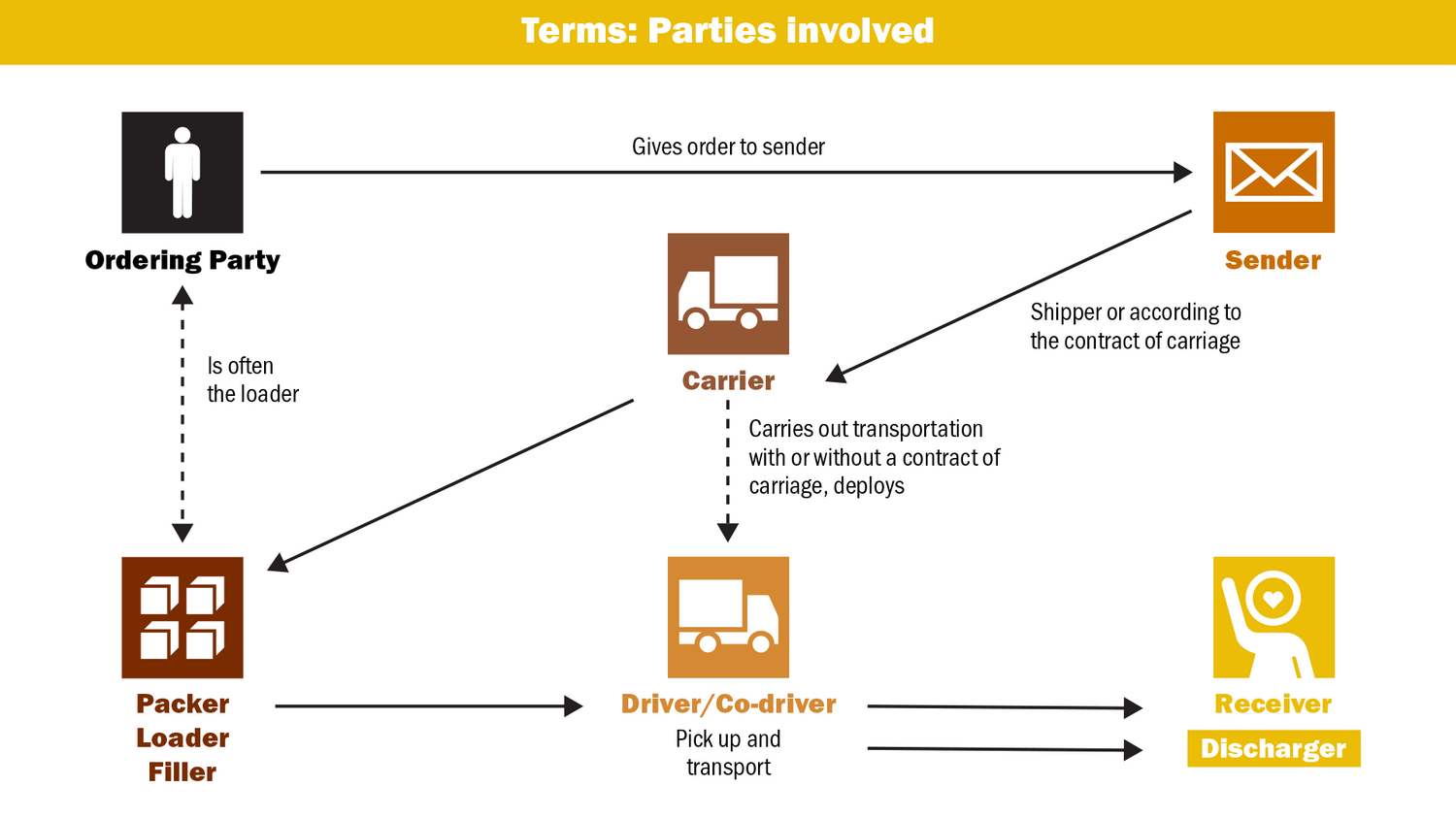 However, forwarders must always observe the following steps when transporting dangerous goods, regardless of the transport route:

#1 The correct labeling of the dangerous goods.

Whenever a hazardous material is transported, it must be appropriately ...

#2 Employees must be trained to handle dangerous goods according to their role.

Type, frequency, and training providers vary by mode of transportation.

#3 Check documents and pass on to drivers/captains and shippers

The following chart depicts the legal notice requirements when transporting hazardous materials. The “transport documents” that a carrier must provide again differ depending on the mode of transport. 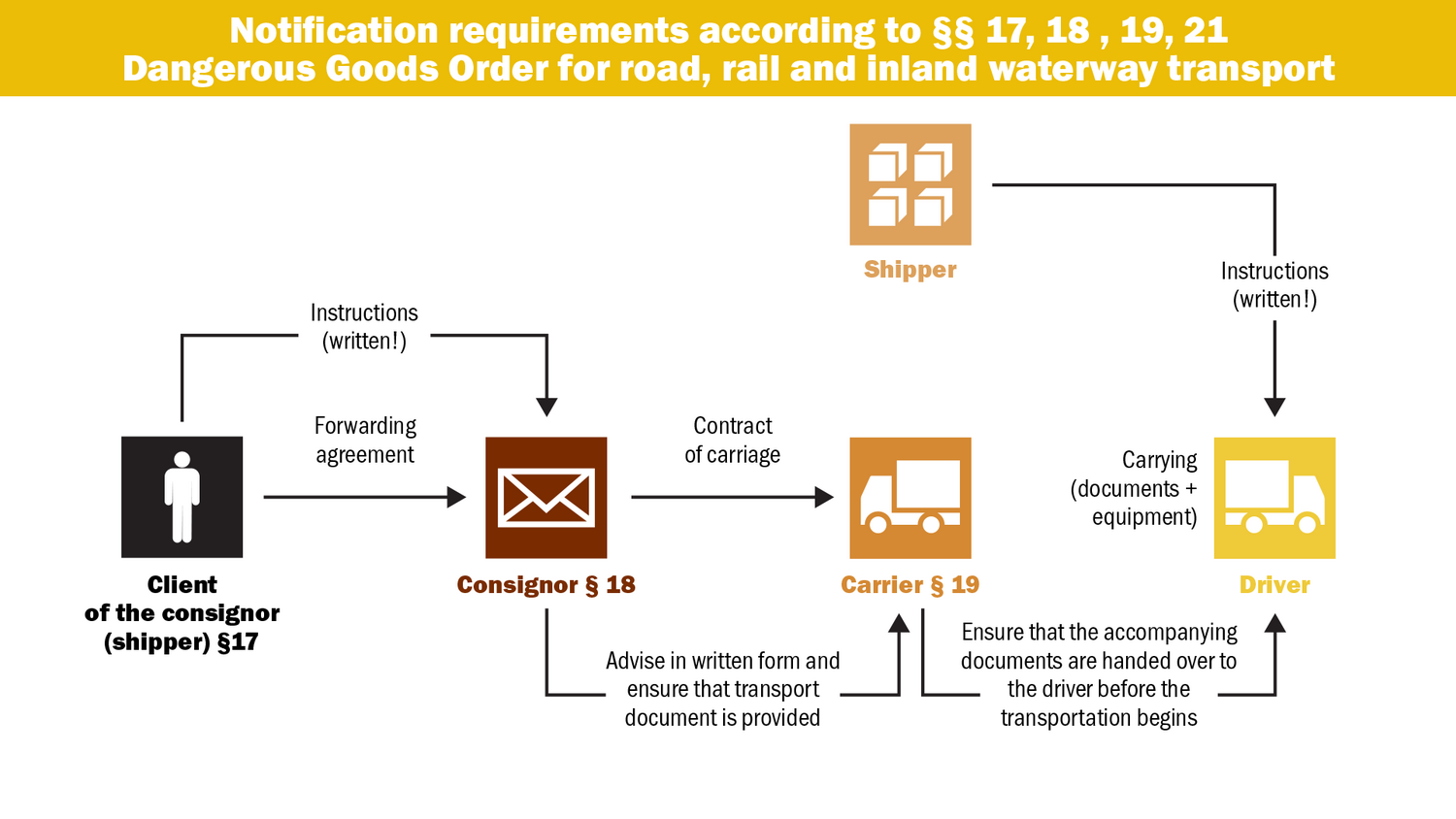 Here is a list of the required accompanying documents for dangerous goods transports:

The NOTOC is the most important document for the captain with regard to the transport of dangerous goods and contains, in addition to the dangerous goods classes and properties, decisive information on how dangerous goods must be transported (e.g., where the ventilation must be switched off so as not to supply the cargo hold with oxygen, where cooling is required, which substances must not be stored next to each other, etc.).
Every year a new complete set of IATA DGR Regulations is issued. In addition, regulations also change during the course of a calendar year. These changes are published in so-called Ammendments and can be found on the IATA website.

For forwarders, the challenge in handling dangerous goods is not so much about the correct labeling and packaging of the goods (as this is done by the shipper), but rather about the correct documentation and special care during transport as well as the appropriate training of all employees involved.

Currently, most documents still have to be printed on paper in the old-fashioned way (e.g. the shippers declaration). However, the trend is towards digital systems that at least automate the documentation effort and directly create and print the correct documents. In the future, it is to be expected that documentation will also take place on a digital level.

With our freight forwarding software Scope, you can easily record shipment data and create all necessary documents automatically. Scope also provides detailed information on the transport requirements of each dangerous good. Learn more about the Digital Standard in digital logistics here or simply contact us.