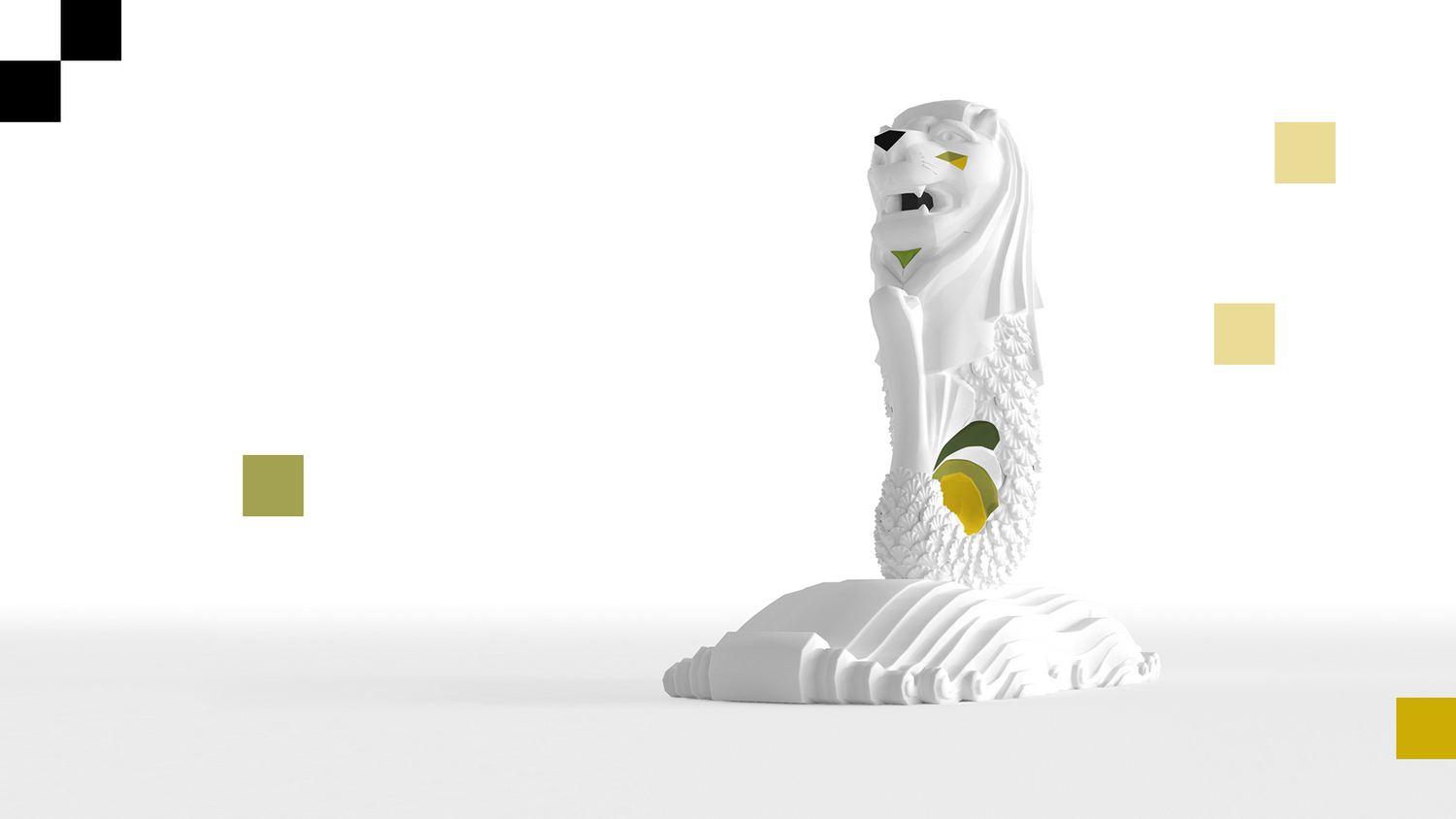 A piece of land inhabited by only 20 fishing families in the 19th century rose to become one of the most important trading centers in the world by the 21st century. The success story of Singapore is known worldwide and is considered a role model for many other Asian countries. Singapore is the smallest state in Southeast Asia and at the same time the one with the greatest prosperity. Despite its small area and small population (Singapore has about as many inhabitants as Berlin and Hamburg combined), it has an enormous importance for the global economy - not least thanks to its favorable geographic water location between China, the entire Pacific region and Europe.

We take a closer look at business and trade in Singapore: how the state has developed, what the future might look like, and why companies can benefit from Singapore as a trading center. 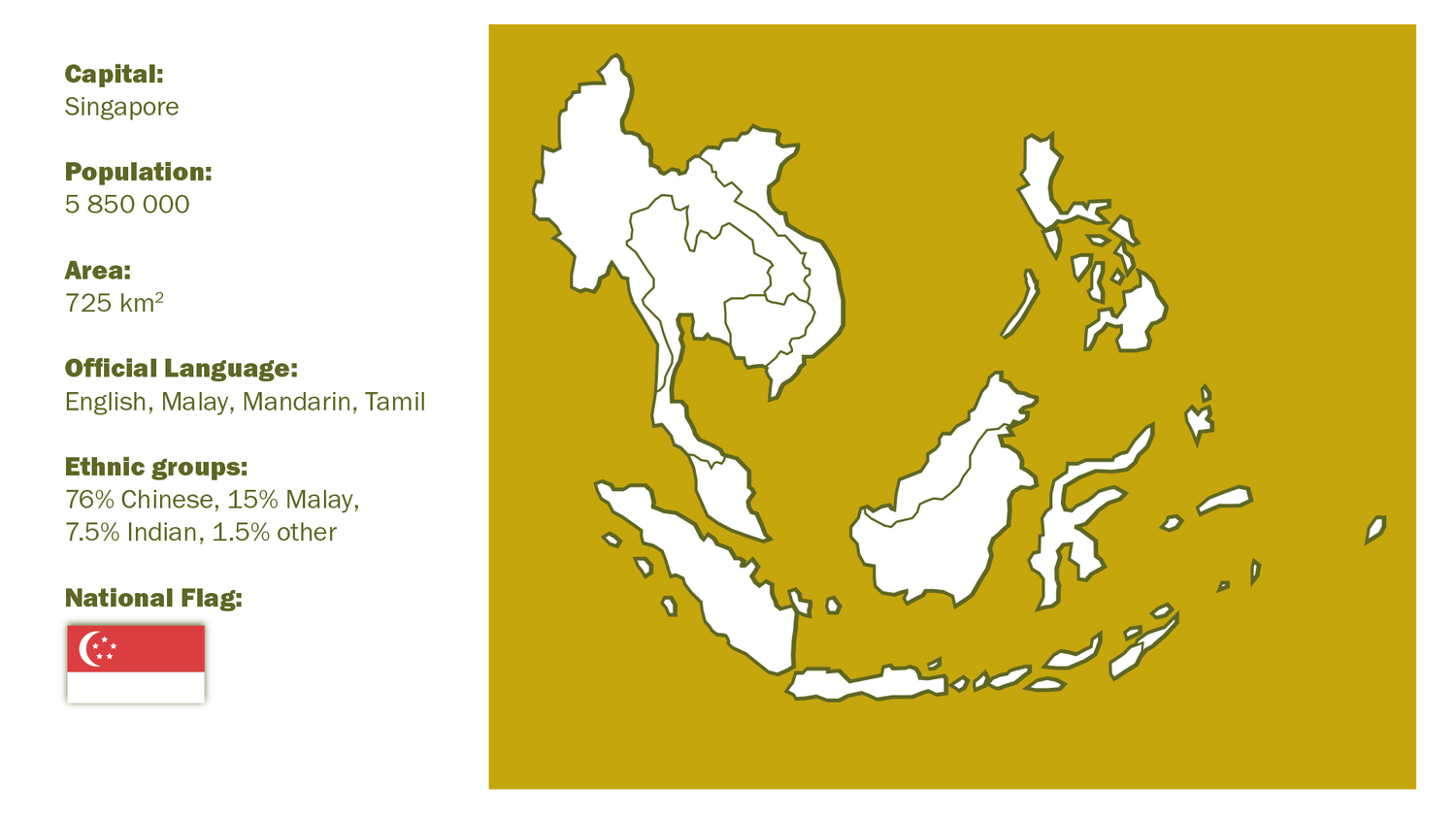 Singapore’s economic development as a global trade and financial center.

Singapore’s small territory is built up almost entirely, leaving little room for agriculture, manufacturing and the extraction of natural resources. This circumstance forced Singapore early on to establish favorable economic relations with its neighboring countries and to seek economic niches in which it did not have to compete with countries such as Malaysia or China.

The economic growth became possible thanks to a mixture of a free market economy, which made Singapore an ideal trading partner and investment location, and social programs to combat the housing shortage and provide good health care, which gave the population a sense of security.

“I don’t think any other economy, even among the other Asian tiger economies, has been able to achieve such a good statistical record of rapid growth, full employment and very good social indicators (life expectancy, education, housing, etc.) in its first 20 years,” says Linda Lim, an economist at the University of Michigan.

A trade balance compares an economy’s imports and exports of goods, providing information about its relative economic strength. And Singapore recorded a trade surplus of around EURO 3.5 billion in January 2021 (source: Trading Economics). This puts Singapore in 16th place among the countries with the largest trade surplus in the world. China, by the way, is in first place, followed by Germany.

But what does Singapore export when it hardly has any natural resources? The most important export goods include refined raw materials and technology goods such as machinery, electrical appliances, pharmaceutical products and other chemicals, as well as refined petroleum products.

Singapore as a hub for goods and a pioneer in sustainability

In addition to exporting its own goods, Singapore’s port and airport are one of the busiest hubs in the world. Bilateral trade in goods amounts to 53 billion euros annually for goods and 51 billion euros for services. This makes Singapore the EU’s largest trading partner in Southeast Asia.

The enormous scale of trade is accompanied by a great responsibility towards the environment, of which Singapore is well aware. Overall, Singapore is pursuing quite ambitious sustainability goals - for example, with the expansion of solar plants and strikingly green urban planning.The state-run Maritime and Port Authority is known for its strict compliance with pollution regulations. And incoming freighters are often checked for their state of technology by taking laboratory samples from their ship’s tanks. At the same time, Singapore is aiming to ban heavy fuel oil completely from its waters. Since the port is one of the most important places for fueling ships, the positive effects on the environment are significant.

The free trade agreement with the EU and its significance

Germany’s largest companies ship their goods to Asia via Singapore. As a result, many freight forwarders have also set up offices here. They all benefit from the free trade agreement between the EU and Singapore, which came into force on November 21, 2019. The agreement eliminates tariffs and bureaucracy that previously made trade between Singapore and the EU more difficult. Trade barriers are to be removed, especially for so-called essential goods such as food, electronics and pharmaceutical products, according to the European Commission’s Directorate-General for Trade.

The President of the European Commission, Jean-Claude Juncker, commented on the free trade agreement as follows:

“This is the European Union’s first bilateral trade agreement with a Southeast Asian country and an important building block in building closer ties between Europe and one of the most dynamic regions in the world. [...] Since I took office in 2014, 5 million new jobs have been created in the EU thanks to foreign trade, meaning that today 36 million jobs are related to foreign trade. Moreover, as external trade accounts for 35% of the EU’s GDP, it is clear how important it is for Europe’s prosperity.”

This clearly shows how much the export nation Germany depends on Singapore’s success. If there were political turmoil or economic difficulties here, the most important route to countries such as China and India could be impaired.

It reportedly takes just three hours to set up a business in Singapore. From building permits to tax returns to insolvency processing - business processes in Singapore require minimal effort. This ranks Singapore second out of 190 economies in terms of ease of doing business (only New Zealand makes it easier for entrepreneurs). The entire World Bank’s Ease of Doing Business report can be found here.

Among other things, Singapore does particularly well in the World Bank report when it comes to trading across borders: 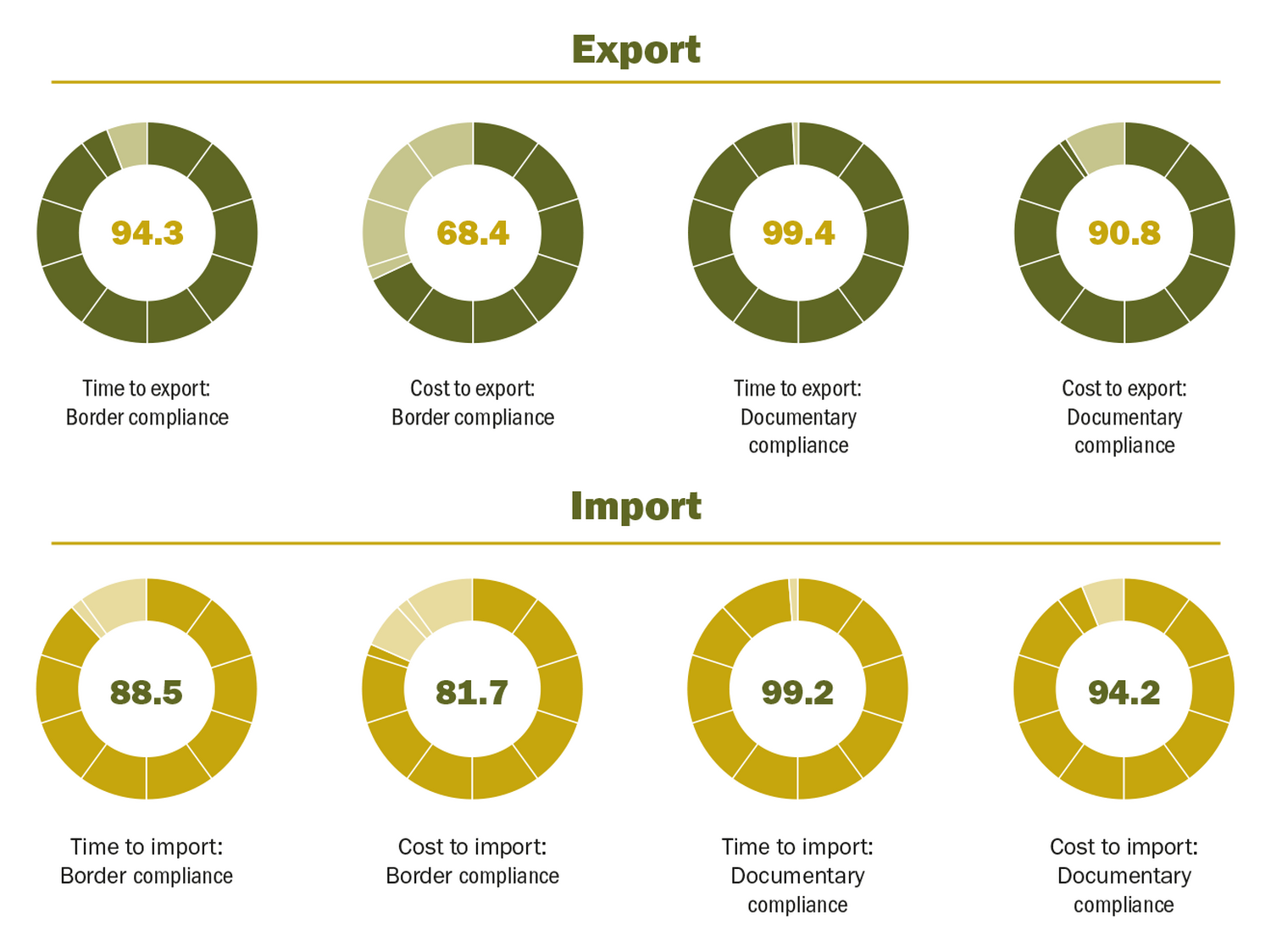 Especially for companies that are used to German bureaucracy, doing business in Singapore feels almost scary. In addition to the “Ease of Doing Business”, companies with a branch office in Singapore also benefit from the low business tax rate of 17%.

About half of Singaporeans are born in Singapore. The population is composed of people from very different backgrounds. This results in cultural adaptability and tolerance being particularly important characteristics of the people living in the city-state. 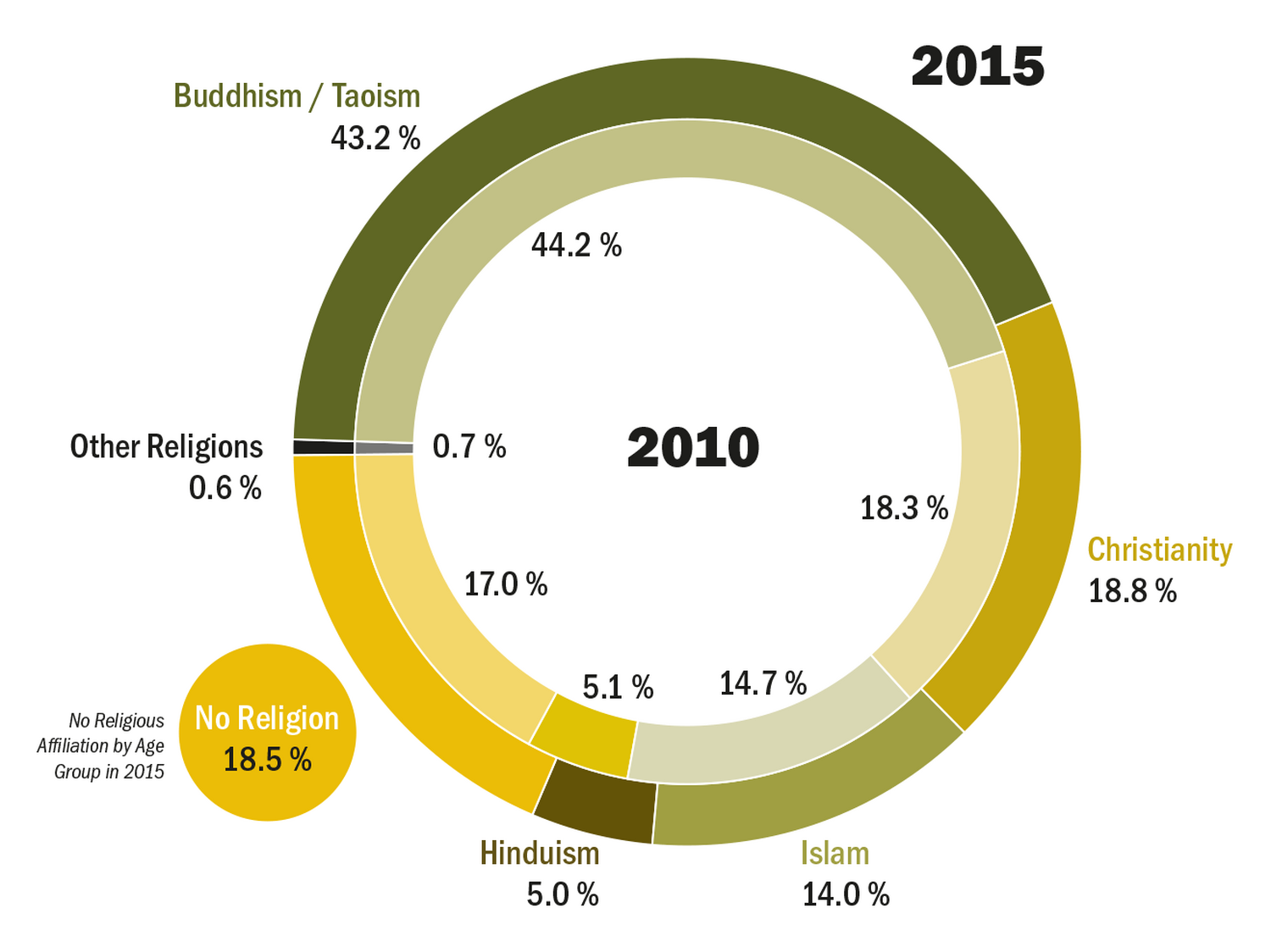 The Singaporean government distributes different population groups among the residential districts using a key to promote tolerance and exchange. On religious holidays, Malaysian families visit their Chinese friends and participate in their customs and rituals - and vice versa. Visits to temples of worship of different religions are also open to people regardless of their own religious affiliation. And the culinary specialties - they are gladly shared anyway! Quite often, the first thing tourists have to report after a visit to Singapore is the food. Nowhere else can you find the best from all corners of the world in such a small space.

Furthermore, in business relationships with companies in Singapore, the tolerance is clearly noticeable. In addition to Malaysia, China, the U.S. and the EU are among Singapore’s largest trading partners. As a result, companies are used to dealing with very different cultures and can adapt in no time at all. Incidentally, just under 27% of Singaporeans speak only one language - the rest speak at least two, often more. English and Mandarin are the most widely spoken.

In addition to an admirable cosmopolitanism, the willingness to perform quickly catches the eye. Singaporeans strive for excellence. This is hardly surprising, considering the challenges the country and its people have had to overcome since independence. Willpower and achievement are considered cornerstones of character.

Although Singapore was comparatively quick to control the spread of the coronavirus in its own country, its very open economy suffered enormously from the global impact of the crisis. Gross domestic product (GDP) fell by 6 to 6.5% year-on-year. GDP growth of around 4% to 6% is predicted for 2021. To get back to “pre-Corona levels” will probably take three to four years.

Trade was affected disproportionately. The following chart shows how much air freight movements fell in million metrics tons in 2020: 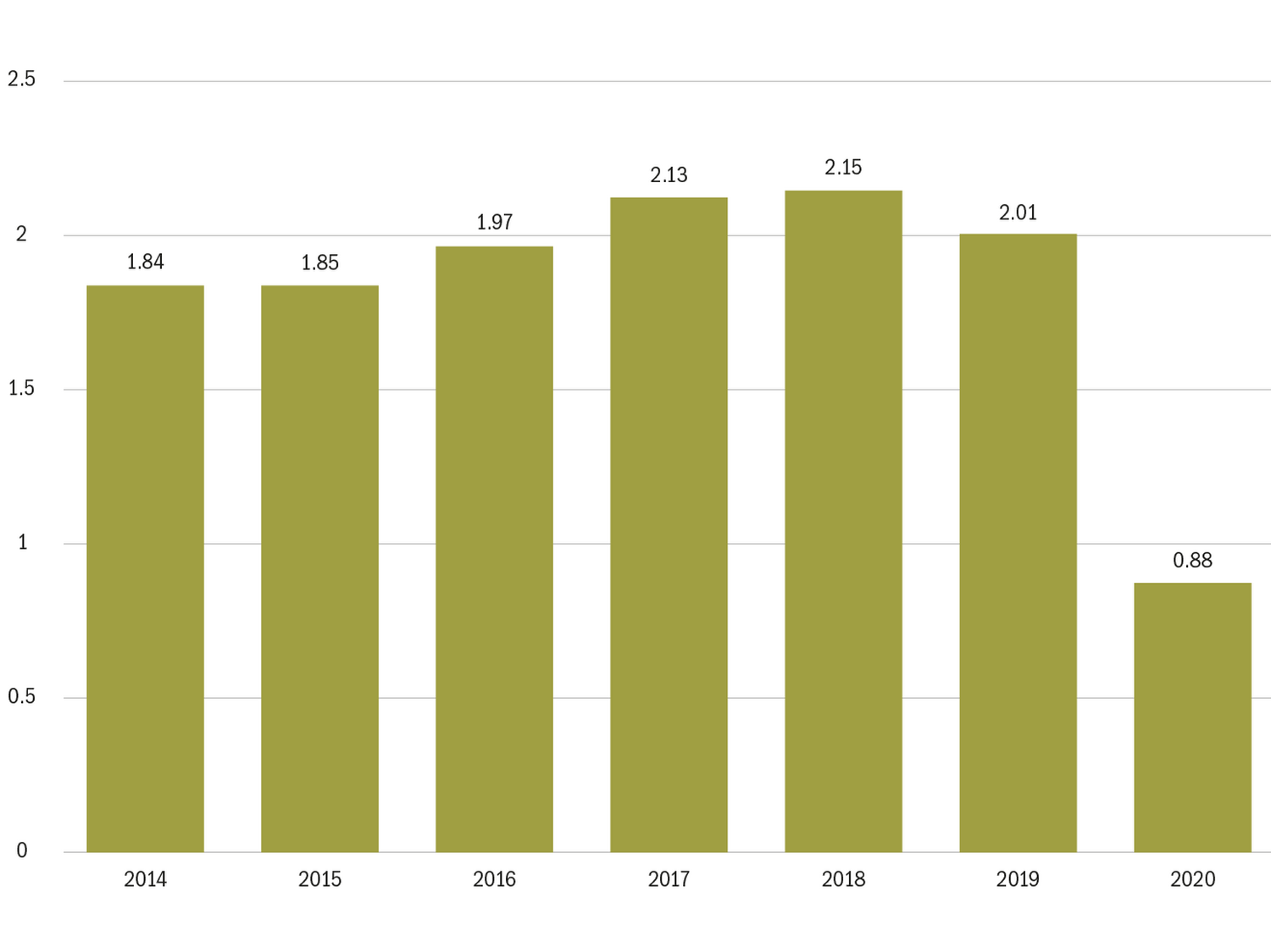 Despite the downturn in the economy, Singapore could recover relatively well. An article on “Das Investment” about the economic developments of Asian economies after Corona states:

“Meanwhile, [...] factors are playing a role in creating the conditions for more robust development of economies in the Asian region. These include greater political stability as well as higher confidence in institutions and their ability to manage crises. Another important trend, which was already underway due to increasing trade conflicts with the West, is a greater focus on the exchange of goods within the region.” [emphasis added by the editor]

And especially when it comes to political stability and a focus on the exchange of goods, Singapore shines. Compared to Hong Kong, Asia’s second major economic player, Singapore benefits from an extremely stable political environment - and has done so for over 65 years. This was also one of the reasons that led Riege Software to open an office here. 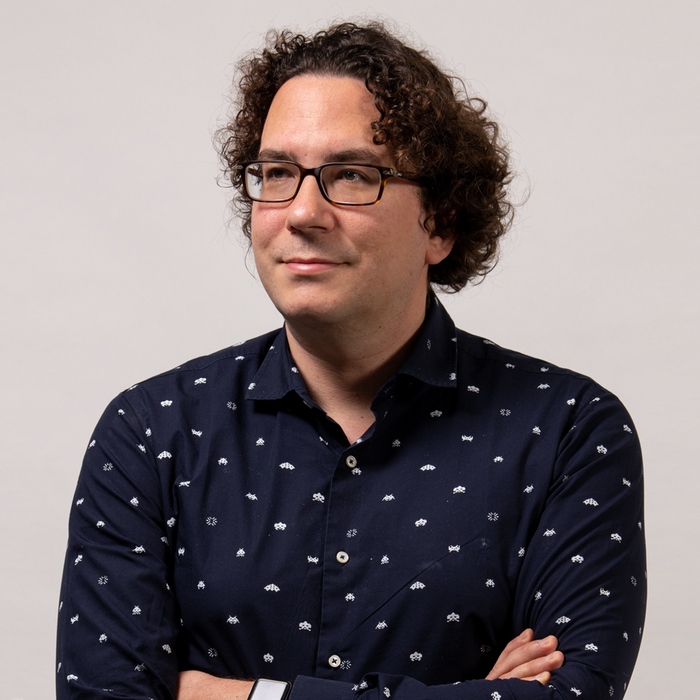 Summary: There is no way around Singapore as a secure trading partner. Not even for Riege.

Singapore is Southeast Asia’s most popular trading partner. And not without reason: free movement of goods, an efficient customs system, a reliable infrastructure, innovation, a stable government and its strategically valuable geographical location will ensure that there is literally no way around Singapore in the future.

In addition to the branch office in Hong Kong, Riege Software has also been present in Singapore since 2020 and supports regional forwarding companies with the Scope transport management software as well as international customers with the import and export of trade goods in the Asian region. 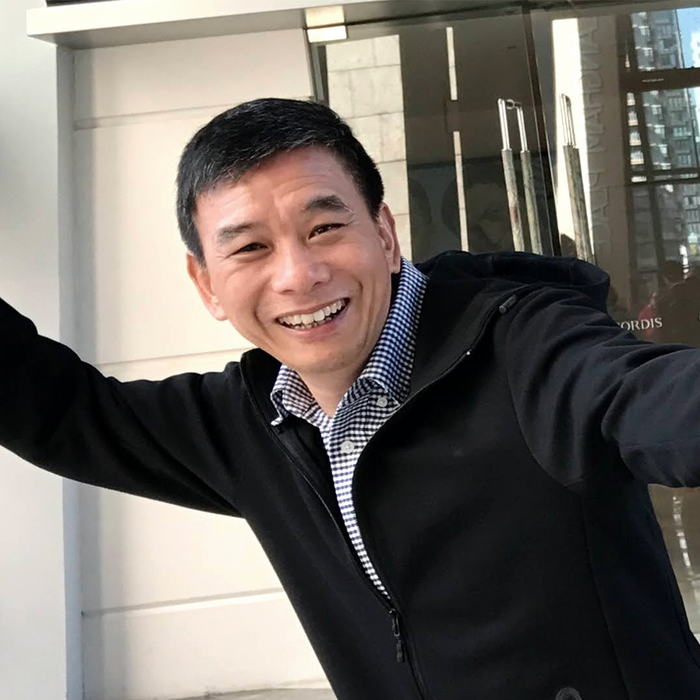